Like a bad student, commuting in Miami has gotten a severely bad grade and it needs to improve.

The public transportation system in Miami-Dade County is notoriously inefficient, and this year the inefficiencies were quantified by an organization called Transit Alliance Miami.

Transit Alliance released a “Mobility Scorecard,” in which they gave a letter grade backed  with data analysis for each of the county’s modes of transportation. The Metrorail and Metrobus systems both received a grade of “D,” and the trolley systems received an “F.”

Marta Viciedo,  founding partner of Urban Impact Lab and Transit Alliance Miami, said that constituents in the county have voiced their opinions that they cannot rely on the bus system, and elected officials are listening. But making changes could take some time.

Viciedo and her organization are working with individuals like Carlos Cruz-Casas, the assistant director for strategic planning of the Miami-Dade Department of Transportation and Public Works, to redesign public transit around the city to better serve the people.

“Starting in early 2019 we are going to launch conversations with the people about a bus system redesign, and we are hoping by mid-2020 to have the entire redesign done,” said Cruz-Casas.

That redesign involves taking a deep look at how transportation patterns have changed over the years, according to Cruz-Casas.

“The off-ramps from I-95 offer free flow access from Brickell into Little Havana because there was nothing in Brickell before, but now things have changed, and we need to address that,” said Cruz-Casas.

Students can get involved in this transit redesign once the program launches in 2019 according to Viciedo. Transit Alliance will be visiting campuses like Florida International University to get their insight into their transportation needs.

“We need every voice at the table, we need to know how everyone is using the system and how they need it to work,” said Viciedo.

The change in transit can’t only be in buses, and perspectives need to evolve to include rideshare apps and new technology. Other panelists like Chris Caines,  executive director of the Miami Urban Future Initiative at FIU and Florida Sen. Jeff Brandes, R- St. Petersburg, spoke on the importance of rideshare apps and autonomous vehicle programs for the future of transit.

Brandes advocated for cities to have a broader perspective on transit, and to make sure that their dollars go into projects that will be worthwhile and flexible, like robust bus systems or more subsidized rideshare opportunities.

“You can’t solve all the problems today. Let’s solve til 2030,” said Brandes. “My general advice is to invest in things that maximize your options, and don’t lock you in like a permanent light rail.” 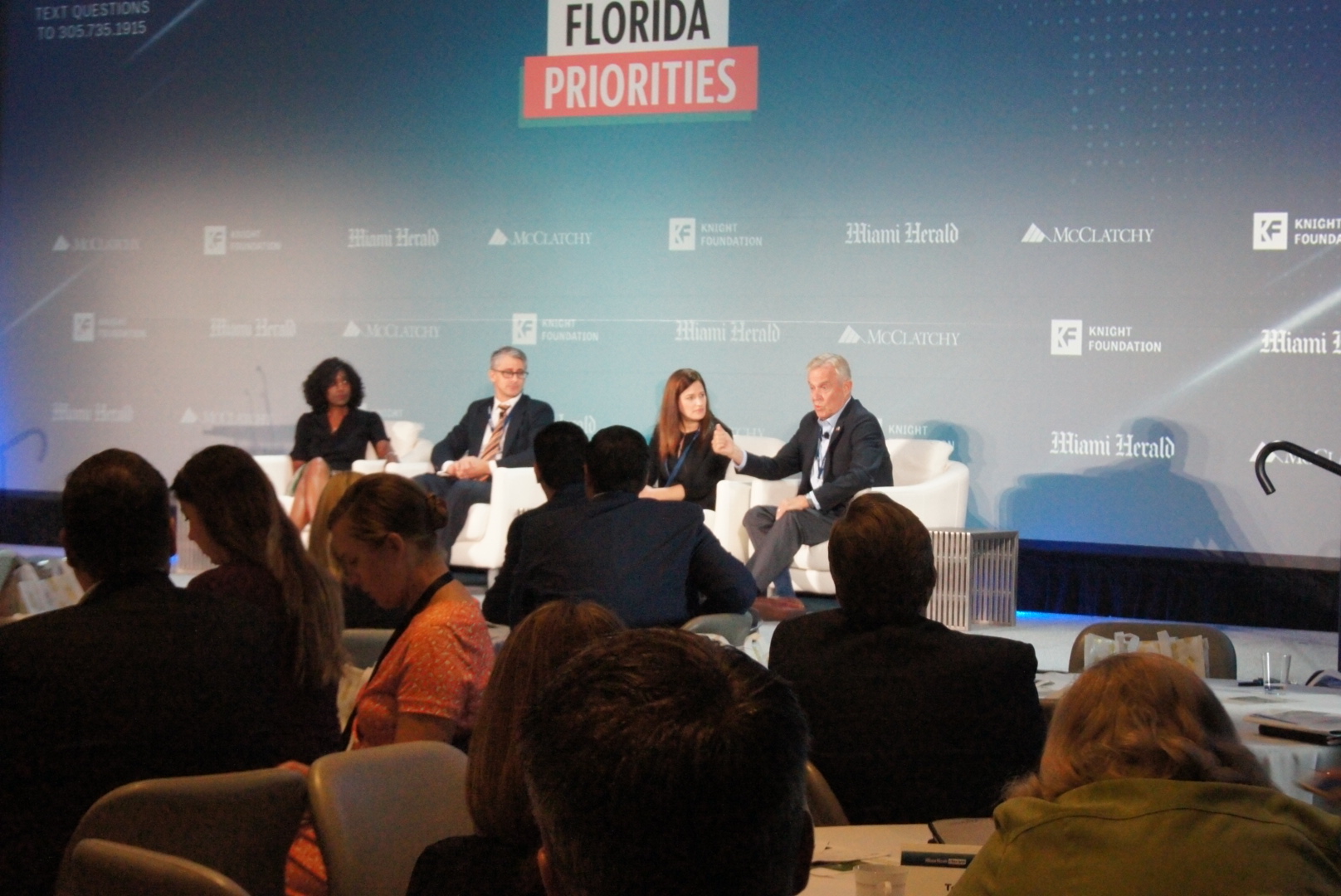 The ballot machines are overheating, and so are Florida voters as the recount of the gubernatorial votes drags on in Broward and Palm Beach counties.

In the midst of the state recounting its razor-thin election results, protesters and political experts are calling for the removal of Broward County Supervisor of Elections Brenda Snipes.

At the Florida Priorities Summit on Wednesday, a panel of political reporters panelists discussed the issues at play in Florida’s election and what needs to be done to make sure the State is no longer “the problem child” of the country.

Marc Caputo, a reporter for Politico Florida, said that Snipes has seen the writing on the wall and that she cannot continue if Florida wants to avoid this issue again.

“She’s running a really incompetent operation, and we need to get rid of her,” said Caputo.

Caputo echoed the sentiments of Republican protesters present outside Snipes’ office on Monday.

Rachel Smolkin, the executive editor of CNN Politics, said that what’s at work in Florida is a fundamental issue of democracy.

“This is a repeat of the Bush vs. Gore scenario but in a time when things are really heated,” said Smolkin.

Part of the problem when it comes to exceedingly close elections, according to Caputo, is media coverage. He said that the media has the responsibility to make sure the public has a realistic expectation for election results.

“We grew so accustomed to our electronic media and instant info that the senate race was called a little early, and we should’ve prepared the public that official returns don’t show up until later on,” said Caputo.

Smolkin called Florida a “conflicted state in a conflicted country,” and agreed with Caputo that the media can do a better job of easing this conflict.

The issue comes not only from public perspective but also from an operational standpoint on the part of elections offices in South Florida.

In Palm Beach County, the recount continues to lag behind due to overheating of ballot machines on Tuesday, Nov. 13. The overheating has required Palm Beach to restart their counting process.

Caputo said that these machines are the same ones that were used by Theresa Lepore, former Palm Beach County supervisor of elections during the contentious presidential election recount between George Bush and Al Gore in 2000. These machines were problematic then, and they’re problematic now.

If Florida wants to avoid these issues in the future, they have to learn from the past, according to panelists at the summit.

Miami Herald Editor Amy Driscoll covered the recounts in Florida in the 2000 election, and she said that things are looking very similar today to the situation then, although the stakes are different.

Back then, the State did not have statutory provisions for statewide recounts for close elections that it does now, said Mark Seibel, national security editor for BuzzFeed News, but many of the same issues are happening.

“Here we are in 2018 with machines that can’t do the job they’re designed to do, and with misleading ballots,” said Seibel. “I thought the state had made great strides since 2000,  but they didn’t go far enough.”